Is this a climate change poem which I see before me? I certainly hope so, because art in all its forms has the potential to succeed, where conventional channels of communication have so spectacularly failed to convey the urgency of global warming. 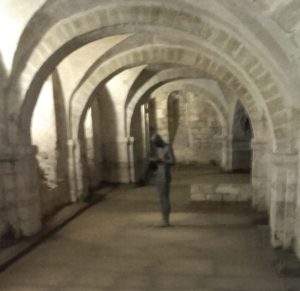 It’s far from certain whether Hence, a short poem by Simon Armitage commissioned for the forthcoming Winchester Poetry Festival, aspires to offer more than a supremely imaginative description of Antony Gormley’s Sound II, the much-admired life-size human figure permanently installed in the crypt of Winchester Cathedral.

For my attennae, wired to any hint of environmental subtext, the poem presses a second tier of buttons marked climate change. As the subject narrates the reasoning for his choice of name, Hence is infused with the language of inundation, warning that “the next big surge” will require “lifeboats” for the bones of Anglo-Saxon kings resting close by. There is admonition for “my people” who “drew cloudbursts into the streets”. This finger-wagging culminates in the enigmatic baptism of Hence, a mocking reminder that human actions have environmental consequences.

I may be reading too much into the text but I’m buoyed by a 2012 New Statesman interview in which Armitage explains:

It’s not my style to meet political subjects head-on but it doesn’t mean that I’m any less enraged or inflamed. I would argue you can write a poem on the Middle East, climate change, any current political topic and make it of that subject with just the inclusion of one or two words.

Let’s hope that Armitage will be persuaded to reveal whether Hence contains the crucial “one or two words” during his contributions to the Winchester Festival next month.

The irony of this particular poem is that its subject, Gormley’s cast, has itself acquired a dynamic and ambiguous relationship with climate change. Each winter, the crypt of Winchester Cathedral floods, the level depending on the severity of rainfall. The photogenic drama of waters rising around the profile of Sound II requires little imagination to transform the image into a tidemark of global warming, threatening the foundations of English heritage. 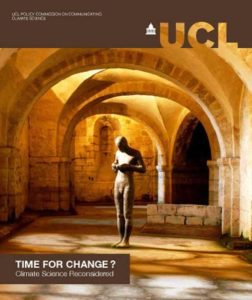 At the height of the UK floods in February 2014, Gormley’s work illustrated front page media stories, waters lapping around its thighs. Later in the same year, the UCL Policy Commission on Communicating Climate Science published its report “Time for Change”. The image chosen for the front cover was the enigmatic figure in the Winchester crypt – on a dry day. On the inside cover, our hero is standing in a lake, pensive as ever.

In the nature of such publications, these choices of illustration were not explained. We were left to infer that, as journalists and scientists fail to communicate the threat of climate change, art must be deployed in the cause.

It’s very possible that this lonely figure gazing into its cupped hands in the 11th century crypt in Winchester will become a symbol of our generation’s inadequate response to climate change, in the UK and beyond.

The twist in this story is that the Sound works were created 30 years ago, surely predating Antony Gormley’s anxiety about global warming. Today, his concerns are unequivocal; when one of the installations on the Dorset coastline was destroyed by a storm in 2015, Gormley’s relaxed reaction seemed to welcome the disaster as supporting evidence.

Nonetheless, I would be very surprised if Gormley had absorbed this broader agenda as early as 1986. How many of us were alive to the threat of global warming at that date? The work has acquired an interpretation that the artist could not have imagined.

This serendipity may conceal a pertinent warning. Tempted as campaigners are to encourage artists to be more explicit in addressing environmental calamity, art and its consumption rarely behaves to order. As Gormley himself has written:

Being preached at is the worst thing that can happen in art..…..It’s very important that the image is not a didactic one. Hopefully it gives you an opportunity to put yourself in the place offered by this silhouette and to think about your connection to and dependence on the context in which we find ourselves… the most important being the elemental world that we have managed for the first time ever, for any species, to have destabilised.

Art offers no silver bullet for environmentalists. They must plug away with their tweets and supporter databases. And take comfort in knowing that art will in its own way reflect and illuminate the deepest concerns of our times.

To read Hence by Simon Armitage, download the Winchester Poetry Festival Programme and refer to the back cover.