The Annual Letter of the Bill and Melinda Gates Foundation is an offspring of the Berkshire Hathaway annual newsletter for investors, famously produced by Warren Buffet who is now a co-trustee alongside the Gates.

Whereas the Sage of Omaha read the runes of wealth and capital, Bill and Melinda inform us what’s trending in their thoughts about global poverty. Any international NGO jostling for crumbs of the Foundation’s largesse ignores the Letter at its peril.

Key headlines of the 2015 Gates Letter convey a rather breathless faith in unhindered global poverty reduction. “Our big bet for the future” asserts that “the lives of people in poor countries will improve faster in the next 15 years than at any other time in history. And their lives will improve more than anyone else’s.” The section on Farming predicts that “Africa will be able to feed itself” by 2030.

I have no quarrel with these statements, either as credible predictions or as desirable outcomes. I do worry that the wording reflects a shallow interpretation of the UN’s draft Sustainable Development Goals (SDGs), with which the Gates Letter associates, encouraging us all to do likewise as Global Citizens.

The new Goals have a rights-based sting in their tail that was missing from their predecessor, the Millennium Development Goals, and which is not recognised in the Letter. If approved in their current form, the 2030 Goals will anticipate availability of water and sanitation for all, sustainable energy for all, decent work for all – and above all, the end of extreme poverty and hunger.

Most development professionals believe that the encouraging progress of recent years does not alter the reality that elimination of poverty and hunger will be incredibly difficult. There’s simply not enough evidence that economic growth, as currently measured, reaches out to the “bottom billion”.

As for Africa feeding itself, we know that India is currently self-sufficient in food grains but nevertheless wrestles with appalling statistics for hunger and malnutrition. Hunger represents a failure of distribution, not productivity.

The broad-brush acceleration of better lives predicted by the Gates Letter is exhilarating but it won’t be enough to achieve the SDGs.

These Goals deserve our support because they will leverage governments into deploying economic tools that proactively assist the most disadvantaged households. The elimination of poverty and hunger compels the rebalancing of government spending priorities in both rich and poor countries in ways that are currently unfashionable. It compels intervention and compromise to calm conflict situations to an extent for which the international community shows little appetite.

The big bet therefore involves a very big ask. The Gates Letter skirts around that inconvenience; indeed it’s possible that this reality is unpalatable to the Gates Trustees and the Davos elite that were encouraged to sign up last week.

This is a shame because every word of the Letter’s final section, the “A Call for Global Citizens” is pitch perfect in its appeal to individuals to sign up to do something, however modest, in support of the SDGs. But a global movement to call governments to account for their promises to achieve the Goals will falter if it’s unprepared for the inevitable setbacks.

Let’s hope that future Gates Letters will gently introduce the political elephant in the room, rather as the Sage of Omaha had to break the news in 2009 that investment in his shares was not after all a utopian casino.

Painfully aware that griping at the natural optimism of philanthropy is unwelcome, I sought refuge in a very different report in my inbox. Subtitled Food Riots and Food Rights – and funded somewhat improbably by the UK government – the research analyses the causes and consequences of food-related riots that brought the 2007/08 crisis of rising food prices to a head.

It was the title page image that instantly resolved my dilemmas over optimism versus caution in human development goals. Like Gates, the Food Riots report adopts the imagery of African children to turbocharge its message. There the similarity ends. 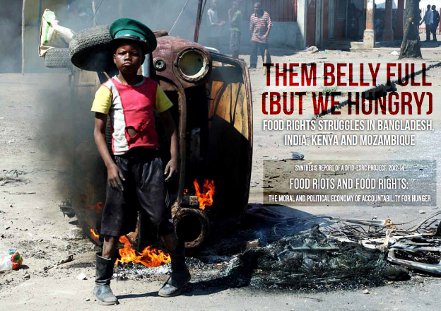 Which of these images* tells us more about the challenge of eliminating poverty and hunger in Africa in the next 15 years?

*I’ve been unable to trace a photo credit or copyright statement in either report. I hope it’s self-evident that the reproduction here is for purpose of debate and not to derive any personal benefit.

Them Belly Full but We Hungry: Food Riots and Food Rights