The notable diversity within the landscape of the international development sector in the UK has lost a unique double-headed species, valued for rare NGO qualities of leadership, innovation, risk-taking and the ability to convert the potential of new communications technologies into a force for global justice. 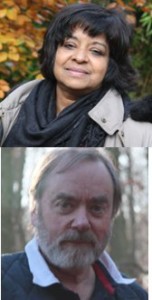 Anuradha Vittachi and Peter Armstrong, the husband-and-wife team which co-founded OneWorld in 1995, stepped down from their executive roles last Thursday.

It’s almost impossible now to picture the primeval state of the internet as it was eighteen years ago. Yet those monotone pages of lurching hypertext links somehow inspired Peter and Anuradha to believe that here was the answer to the pent-up frustrations of their respective backgrounds in BBC production and development journalism.

Their vision that the internet could sidestep the maddening failure of mainstream media to address global poverty and injustice captivated the NGO movement. OneWorld Online, as it was then known, was commissioned to build the earliest websites for DFID, Amnesty, Christian Aid and many more.

The logical consequence was to create a OneWorld site to promote the content of such partners from every corner of world, to develop links between community radio stations in Africa, to bring audiences to development film-makers and much more. Here was one of the web’s first thematic portals.

Edited first by Anuradha Vittachi, and then by Mark Lynas, oneworld.net was for a few years either side of the millennium the first point of reference for the global online community concerned about human rights and sustainable development. Its success contributed to the surge of public awareness that almost overwhelmed the 2003 anti-war march in London and which underpinned the impact of the Make Poverty History campaign.

The model of NGO partner engagement with the portal spawned a dozen multilingual OneWorld centres around the world. Hundreds of jobs have been created over the last eighteen years by these various OneWorld entities and projects. And thousands of NGO workers today owe at least one step of their careers to a vacancy advertised on the OneWorld Jobs service.

That’s not a bad outcome for the tiny initial team working from a near-derelict classroom built for wartime evacuees in the founders’ Oxfordshire garden.

Any NGO founder will tell you how difficult it is to sustain an organisation beyond the early frenzy of motivation. And the survival rate of internet enterprises founded in 1995 is microscopic. The achievement of Anuradha Vittachi and Peter Armstrong has been to bolt together these adverse environments and still defy the odds.

The years of the dotcom boom were especially trying. It became almost impossible to employ skilled web technicians on NGO salaries. Lack of access to private capital denied OneWorld the opportunity to exploit its first mover advantage in a number of applications.

With hindsight, these handicaps may have been a blessing because OneWorld was forced to keep innovating. Obsessive about new media technology, Peter Armstrong has been notoriously inclined to move even before the first movers. On his last day at work, Peter was overheard purchasing the latest Apple gadgetry.

The advent of mobile phone technology and its accessibility even in the poorest countries gave OneWorld a new lease of life. The SMS text and mapping tool created to monitor the 2012 elections in Senegal and Sierra Leone enabled some of the world’s poorest people to influence the international community’s assessment of the fairness of the vote.

Under the leadership of Anuradha Vittachi, OneWorld became one of the first NGOs to implement the cultural shift necessary to embed the principles of climate justice into its development programmes, as opposed to talking about it.

One consequence is a commission currently in progress to research how technologies might be deployed to overcome the considerable disadvantages experienced at UN climate talks by negotiators from the poorest countries.

Cleverly timed to coincide exactly with the 18th anniversary of the 1995 launch, the founders’ departure has merged into a celebration of the “coming of age” of OneWorld.

In a warm tribute to Peter and Anuradha delivered at OneWorld’s 18th birthday party, Simon Maxwell, chair of the Climate and Development Knowledge Network, recalled the tedium of NGO communications in the pre-internet age. “You brought glamour to our lives because you opened the world to us through all these extraordinary technological innovations,” he said.

Bill Gunyon has been an employee of OneWorld since 1999 and blogs at treadsoftly.net