It’s been the weapon of choice for a thousand ill-fated climate campaigns. The projection of earth science, reinforced by startling imagery, is the shock treatment to reform our errant lifestyles.

This mode of advocacy is certainly a component of the latest assault on our senses by Stop Climate Chaos, the largest coalition of UK groups “dedicated to action on climate change and limiting its impact on the world’s poorest communities.”

A preview of its new venture imagines an uncomfortably tropical English countryside where a ration-card existence must make do without the national grid or familiar road and air travel. Threats of ruinous litigation for willful past misdemeanors are in circulation, as the cartography of Africa’s coastline is rewritten by rising tides. 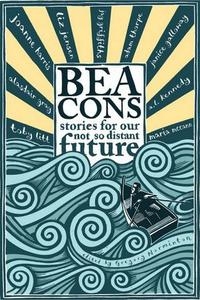 Except that the medium of persuasion is different this time. There are no eye-catching tsunamis or glaciers; no vain appeals to “justice” or “sustainability” in template emails to politicians. Instead, there’s an understated jacket design for Beacons, a collection of “stories for our not so distant future.”

One of them was singled out for BBC Radio’s Book at Bedtime on Friday, read with disarming irony by Oliver Ford Davies. If the other short stories are half as good as Take Notice by Adam Thorpe, then this foray into literary activism will deliver handsome royalties to support the Coalition’s more conventional political lobbying.

Thorpe’s miniature gem succeeds by avoiding any judgement, or even discourse, about the central topic. We have to work it out for ourselves.

The narrative tension centres on the troubled conscience of old age experienced by Gus, a retired senior politician – “he’d spent years not even making amends.”

As a life story of personal and political calamity unfolds, occasional throwaway lines confirm that we are in a disturbing post-linear climate world. The hint of cause and effect is not denied by Gus: “the lightning conductor they called me,” he says, when discussing the fallout of an unspecified terrible event during his career, described as the “revolt”.

Our judgement of the flawed character of Gus – his refusal to accept the truth, the treatment of his daughter, the younger generation – therefore reflects back as condemnation of ourselves as environmental stewards.

This response is invited rather than imposed. We’re not told that the sepulchral “famished” visitor in a white suit and bicycle clips is a black African. But this encounter and the ensuing demands for restitution provide the fulcrum of the story and suggest deeper symbolism.

Perhaps my imagination is running ahead. But much anxious academic research into ineffective communication of global warming and other systemic environmental change has increasingly summoned the creative arts as the saviour.

Climate change novels such as Ian McEwan’s Solar have not delivered lasting impact. Maybe the short story form, with its highly compressed narrative, finding release in a single moment of concluding revelation, will better match the attention span of the digital age.